Experience the thrill of the Toyota Gazoo Racing Vios Cup 2022 live on track, and online 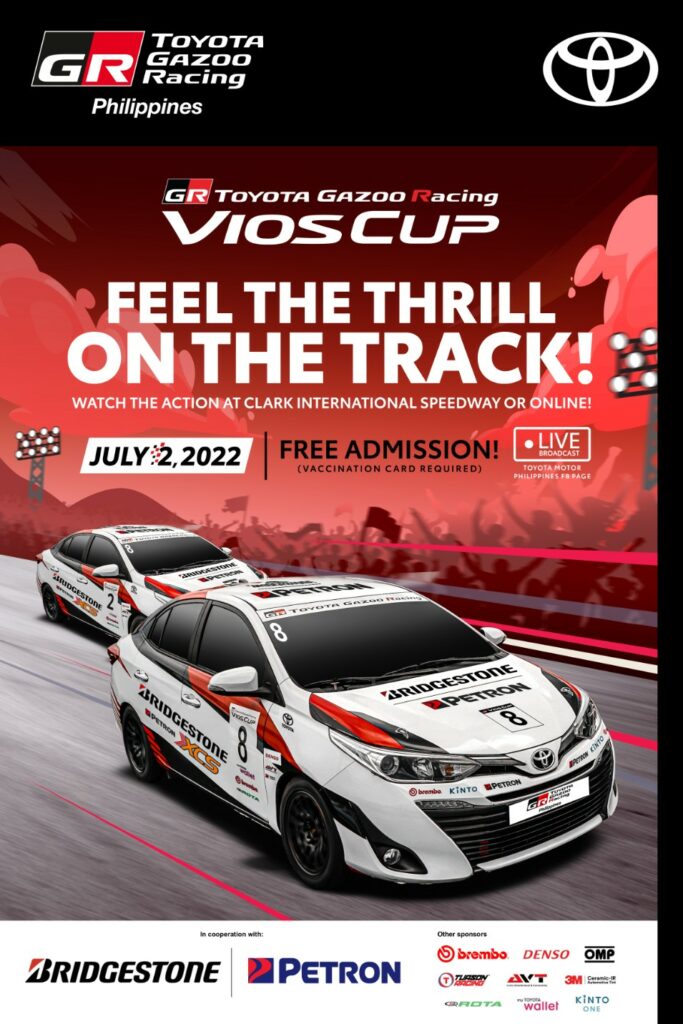 Get ready to get back on the track this July as Toyota Motor Philippines (TMP) opens the 2022 season of its premier one-make-race series, the Toyota Gazoo Racing (TGR) Vios Cup!

After its series of virtual programs for the 2021 season where racing fans watched the live racing action via TMP’s online channels, this year’s edition of the Toyota Gazoo Racing Vios Cup is once again welcoming the passion and the energy of the live audience back in the grandstand, with the first of its three legs happening on July 2, starting at 930am, at the Clark International Speedway in Pampanga.

The TGR Vios Cup will continue to be livestreamed on the Toyota Motor Philippines and Toyota Gazoo Racing Philippines Facebook accounts to enable more motorsports enthusiasts to be part of the action wherever they are.

Bringing more fun and excitement to the race is the Autocross Challenge where celebrities and influencers, plus members of the media get to test their speed and racing skills by navigating the specially designed race course.

This year, TGR Vios Cup will also pave the way for the country’s best e-racers to bring their sim racing skills to the real world by making the Gran Turismo champions of the Toyota Gazoo Racing GT Cup tackle the TGR Vios Cup Autocross event.

As it opens the race track to exhibit the thrill and joy of live racing to on-site and online audience, TMP continues to fulfill its goal of elevating motorsports in the country and providing a platform for top Filipino racing talents, guided by the TGR philosophy of pushing the limits for better.

“Over the years, the TGR Vios Cup has been serving as a vehicle for us to champion the local racers, and to bring the thrill of racing to everyone. We thank our ever-growing community of racers and motorsports fans for their support which makes the TGR Vios Cup one of the biggest, and longest-running racing events in the Philippines,” TMP First Vice President for Vehicle Sales Operations Sherwin Chualim said. “With the event welcoming the public to the grandstand once again, it’s the perfect way to bring together the ambitious spirit of the racers and the rousing energy of the fans.”

Admission is free for everyone, and only vaccination cards are required to gain entry to the speedway. The TGR Vios Cup livestream on TMP’s and TGR PH’s social media accounts will feature commentaries, special segments, racer interviews, and audience engagement activities.

Legs 2 and 3 of the TGR Vios Cup will happen on August and November respectively.

Toyota Gazoo Racing Vios Cup is organized in cooperation with Bridgestone and Petron, and is supported by Brembo, Denso, OMP, Tuason Racing, AVT, 3M, ROTA, My Toyota Wallet, and Kinto One.