BTS is taking a “Break”

The fear that all K-Pop fans have been keeping to themselves has finally manifested.

The popular Korean K-Pop Group, BTS, have announced that they will be taking a “temporary hiatus” in order to pursue solo careers.

The announcement came at their annual FESTA dinner, which was recorded and posted online. During the dinner the band’s seven members also discussed the future of the band and their detailed plans as solo artists.

The South Korean band, made up of Suga, Jin, RM, J-Hope, Jimin, V and Jungkook, hope to “spend some time apart to learn how to be one again.” 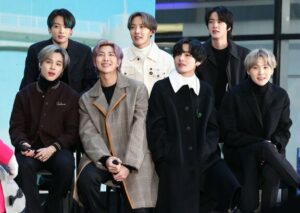 The band’s former stance about solo projects apparently have changed as J-Hope opened the discussion by revealing that he has already made plans for his own solo career. Band member, RM, added that they will eventually be showing their different colors and that each member will definitely have a different approach to their respective sound and career.

Jimin said that the time has come for their to decide how they want to be remembered by their fans.

“I always thought that BTS was different from other groups, but the problem with K-pop and the whole ‘idol’ system is that they don’t give you time to mature.

RM also said that because of the culture of K-Pop, one would have to keep writing and producing material and that was one of the constraints that prevented them from pursuing their solo projects in the past.

J-Hope echoed the sentiment and said, “We should spend some time apart to learn how to be one again, I hope you don’t see this as a negative thing, and see it as a healthy plan. BTS will become stronger that way.”

This is the group’s second hiatus since 2019.