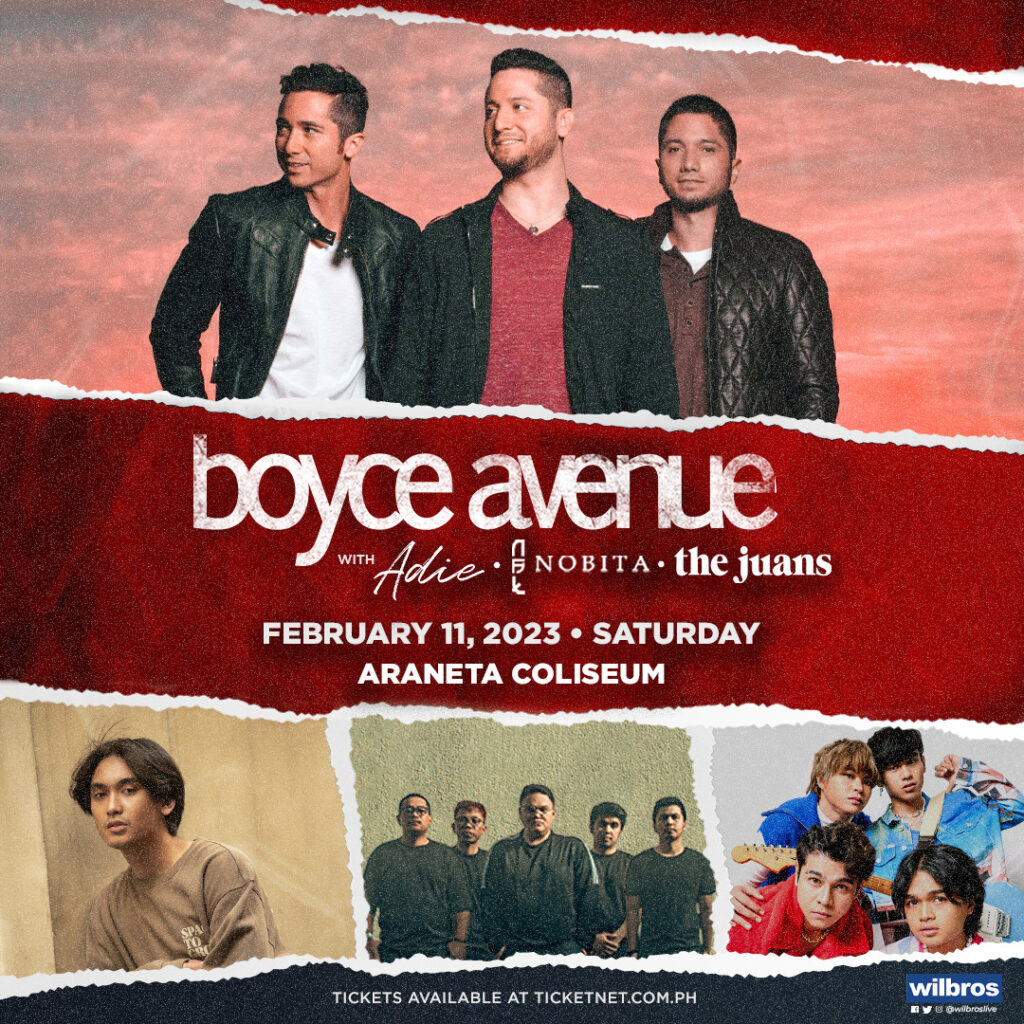 The “Boyce” are coming back to their second home – the Philippines. One of the biggest independent bands in the world – Boyce Avenue, are returning for the Valentine’s week. They will be performing in MANILA on February 11th at the Araneta Coliseum, in CEBU on February 12th at the Waterfront Hotel Ballroom, and in DAVAO on February 14th at the SMX Convention Center. Joining them are today’s O.P.M. hitmakers Adie, Nobita and (Manila show only) The Juans.

Boyce Avenue is a Florida-based band whose name is a combination of two streets they grew up on in Sarasota. The band is popular for its strong acoustic roots and consists of the three Manzano brothers – Alejandro (lead vocals, guitar, piano), Fabian (guitar, vocals) and Daniel (bass, percussion, vocals). The band was formed in 2004 and in 2007 they began posting their videos on YouTube to great success. To date, they have over 4.8 Billion YouTube views and over 13.2 Million subscribers, making their channel one of the most popular in the world. The band frequently tours North America, South America, Europe, Asia, Australia, the Middle East and visits new countries every year.

Singer-songwriter Adie is best known for his massive hits “Paraluman”, “Tahanan”, “Dungaw” and “Mahika” which features Janine Berdin, and is currently one of the top artists on Spotify Philippines with over 3.6 million monthly listeners. OPM band Nobita burst into the music scene with their mega-hit “Ikaw Lang” and wedding-themed track “Unang Sayaw”, and also reached a new milestone in their career for achieving more than 130 million streams on Spotify alone. They are also joined in Manila by pop rock band The Juans, who are behind the chart-topping hits “Hindi Tayo Pwede” and “Hatid”, and who recently had their first major concert at the Big Dome.

Catch Boyce Avenue with your favorite O.P.M. hitmakers in this one of a kind concert experience performing your favorite love and hugot songs on Valentine’s week. Tickets go on-sale Saturday, November 19 at 10AM – MANILA via TicketNet.com.ph and TicketNet outlets, and CEBU/DAVAO via SMTickets.com and SM Ticket outlets. Presented by Wilbros Live.