At the SHAZAM Menu launch 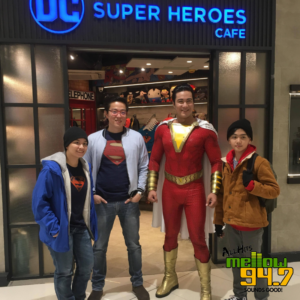 DC fans are counting the days till the release of its latest offering by way of the big screen debut of SHAZAM! Having celebrated its 75 years in 2015, the hero whose true identity is the kid named Billy Batson will be celebrating the big 8 next year. What a way to celebrate its longevity and popularity by way of his own feature film.

Locally, DC Super Heroes Cafe is also one in the spirit of things and has recently launched its SHAZAM inspired menu last Friday, March 22. Like the Aquaman menu last year and all other dishes served, the meals  are all thematic. While this replaces the Aquaman menu of last year, only the Fish and Chips have been integrated into the main menu and the Mera-inspired drink called Mera Con Hielo can still be ordered upon request. This year the selection of meals aims to embody the spirit of the mystical hero by way of the different qualities of the Greek Gods that make up the hero’s inherent powers and acronym. 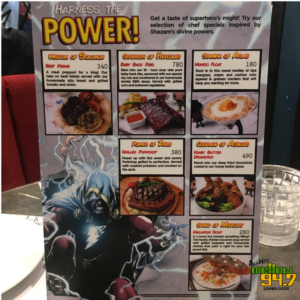 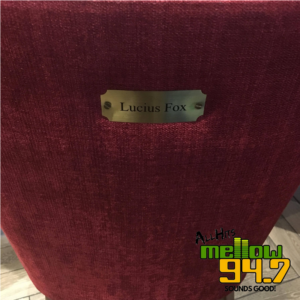 Before they served the meal, we all took to our seats and waited for the program to begin. If you haven’t visited the cafe, you would be delighted to find out that each seat is individually labelled. That is, there is a name plate behind each and every seat that inscribes the name of a hero or that of a villain. Just one of the nifty things to do for first time visitor or a returning one. Find the seat that bears the name of your favorite character. Like any other meal, it began with a bowl of soup. In keeping with the theme, the soup referenced the SPEED of MERCURY. In its basic form, it is Macaroni Soup, the kind that most of us would make whenever a member of the family is ill or one that we would just prepare on hand as its our comfort food we Filipinos fondly call, “Sopas”. The thought behind the soup is one that you can whip up in a hurry and yet would satiate you hunger pangs. The chicken macaroni soup is served with a grilled baguette and topped with homemade chicken liver. The baguette does its job well as it complements the creaminess of the soup alongside it. With that broth to whet our appetite, we were ready for what was next and when it was laid down before us, it was time to dig in. 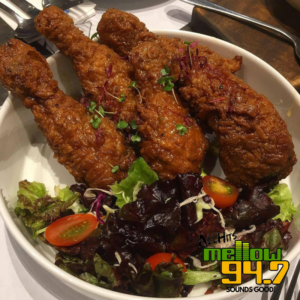 And dug in we did as the next meal was a generous serving of chicken, consisting of deep fried drumsticks and coated in DC Super Hero Cafe’s own blend of honey butter glaze. While the dish is called Honey Butter Drumstick, it also seeks to reference another power that Shazam possesses and forms part of his acronym, and that is the COURAGE of ACHILLES. One may have speed and courage but without the insight on when to use it and how to use is where the WISDOM of SOLOMON comes in. Served on a wooden plank along with home made pita bread, the next dish was a serving of Beef Kebab. Cooked with the cafe’s own blend of spices, it was served with a bowl of steamed white rice. The one element that ties everything in was the inclusion of a cube of butter that was shaped in the form of a lightning bolt placed atop the rice. It smelled good and tasted great. 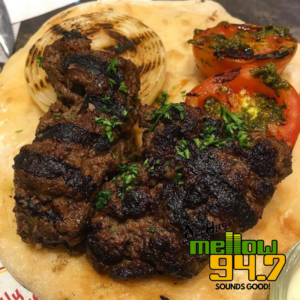 In between the meals, as the demand on the kitchen was unmistakably great, we were also treated to some fun and games with quizzes that tested every ounce of Geek knowledge regarding Shazam and all things wizardly. The highlight of the games was when the host, asked everyone in the room to shout Shazam. But she felt that once was not enough and so she had us shout the name 3 times and by the third time we did, we were all hyped up for more food and got surprised as Shazam himself glided into the room! It turns out that he was a Justice PH cosplayer named Prince who physically embodied Shazam, down to the suit, the height and all things that we would associate his mystical hero with. Naturally flashes from cell phones and cameras started going off and a quick photo op with Edric Chua, the man behind DC Super Heroes Cafe commenced. The meals soon resumed after the games with one that would channel the STRENGTH of HERCULES. This came in the form of a plate of Baby Back Ribs that took 18 hours to cook! These ribs that were seasoned with their special dry rub and slathered with the cafe’s own homemade BBQ sauce was definitely my first favorite meal of the night. I personally am not much into Baby backs, but whatever strength and resolve I had in usually ignoring this dish when eating outside, they all failed as I had to give in. The ribs are served with grilled corn and some buttered vegetables. 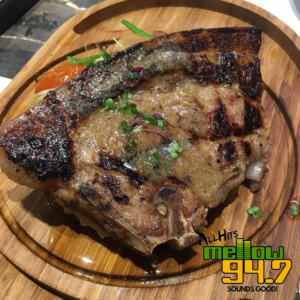 Where there is strength, indeed there is power. Next on the menu that was brought out was the generous cut of a grilled pork chop. It was grilled to perfection and served with mashed potatoes. You can tell that the pork chop itself was grilled on the spot. And with a dish like that, it aims to harness, not to mention reference, the POWER of ZEUS.

But all this power and strength is well and good but without the endurance to keep it going, a superhero also would need some stamina. Clearly my second favorite meal of the night, it satiated my love for sweets. It was the final piece of the menu that would cap the entire set just perfectly. It was the cafe’s own version of a Mango Float served on one of their specialty long stemmed glasses which for its part references the STAMINA of ATLAS. A generous blend of ripe mangoes, swimming in cream and cashew nuts and layered in with graham crackers. The menu did warn us that it would make us want more. And wanted more we did. We won’t be surprised if you would feel the same once you’ve tried it. 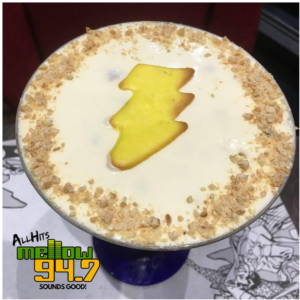 Like any meal, you would have to try it in order to find the one dish that would call out to your own palette. And if it calls out to you more often than not, and would prod you to return, then you finally have found a favorite.

DC Superheroes Cafe is located at the 4th level of the Fashion Hall in SM Megamall and are open from 10am to 10pm.

So the next time you drop by Megamall, you know that it will never be a complete visit unless you drop by the cafe. And if we bump into each other at the Cafe one time, let’s talk favorites.