Venom and Ghostbusters sequel are a GO! 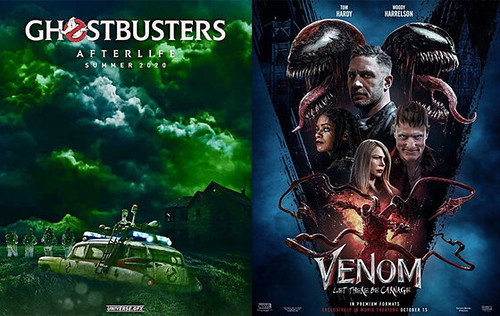 Movies have always set themselves to be made for entertainment. But if you are the movie maker, your goal is to both entertain and at the same time walk away with more bucks in your pocket.

While things are slowly indeed opening up, people are slowly acclimating to the possibility of things going back to how everything was pre-pandemic. But what if in spite of the pandemic, you have two hit movies under your belt, namely in 2021, you would want to do another round of them in order to keep the franchise alive, right?

Two of these movies franchises are Venom and Ghostbusters.

This was announced recently by Sony during Cinema Con 2022 in Las Vegas.

The reveal came in the form of a sizzle reel that displayed titles cards for Venom 3 and Ghostbusters respectively following the successful box office receipts for Venom: Let There Be Carnage and Ghostbusters: Afterlife.

At the time of the announcement, no release dates were given for either of the two films, and no names have been revealed nor rumored to be attached to either of the two projected sequels. However, it is certainly a no-brainer that actor Tom Hardy will be reprising his role as Eddie Brock in the proposed 3rd installment of Venom.

On the other hand, while The Ghostbusters franchise has been around for quite a while, it has proven to be a  sure ball of a hit with audiences, especially for fans of Finn Wolfhard of Stranger Things.  The success of the Venom films was a nice surprise for Sony. The movie series has been an immensely popular one over the last few years, despite the negative reaction to the first Venom back in 2018.

Venom director Ruben Fleischer admitted that while he knew that audiences liked his work as he as sat with audiences and saw their reactions, it was still a surprise that critics have not embraced the films as positively as the audience has. And if they didn’t like it in the first place, then it would not have had the success that the two films currently enjoy.