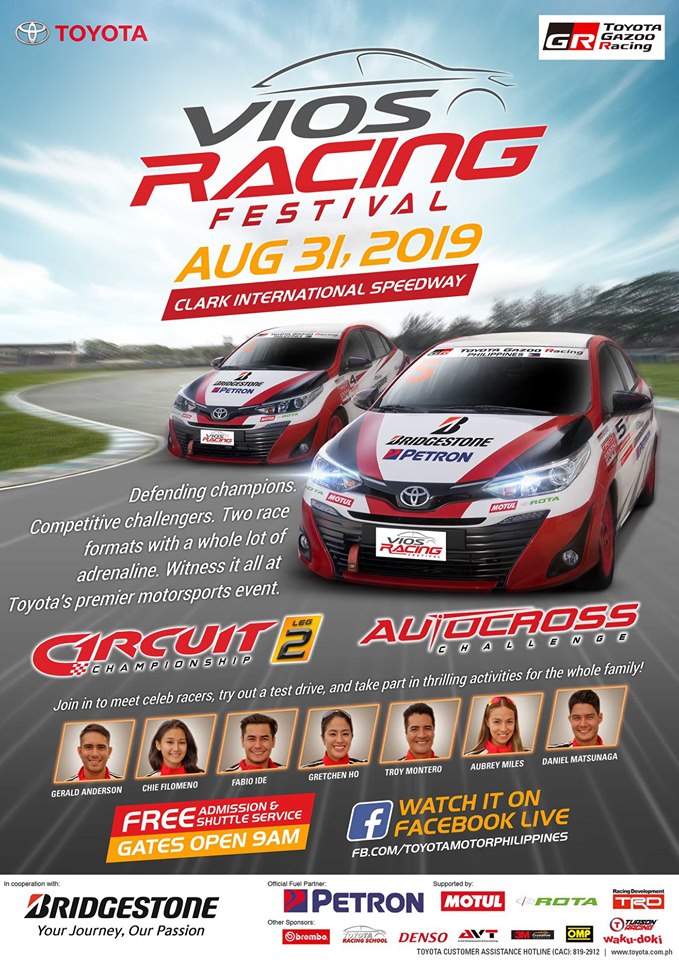 Toyota Motor Philippines (TMP) is inviting all racing fans and car enthusiasts to the August leg of its grassroots motorsports series, the Vios Racing Festival.

Experience waku-doki this weekend at the Clark International Speedway as celebrities, car club members, Toyota owners, and motoring media take it pedal-to-the-metal with the Toyota Vios. To further elevate excitement for race fans, the Toyota GR Supra will mark its return to the Vios Racing Festival race track since its first official Philippine appearance during the previous leg. This time, Toyota’s flagship race model will join in the action as the official pace car of the circuit races.

Admission to the event is free, and there will be shuttles available to the general public from SM City Clark going to the venue. Side events and activities will also be opened for the enjoyment of groups of friends or families.

The spectacle can also be streamed via Toyota’s official Facebook page at facebook.com/ToyotaMotorPhilippines.

Scores garnered by the racers from the previous leg are being accumulated in order to declare the overall champions by the end of the 2019 season. This applies to both racing formats: the Vios Circuit Championship and the Vios Autocross Challenge.

Here are the winners of the Circuit Championship’s previous leg, held last June:

!!On the other hand, Inigo Anton and AutoIndustriya’s Jose Altoveros have been the consistent winners of the Autocross Challenge for Car Club Class and Media Class, respectively.

The Vios Racing Festival is held in cooperation with Bridgestone; alongside official fuel partner Petron; supported by Motul, Rota, and Toyota Racing Development; as well as other sponsors Brembo, Denso, AVT, 3M, OMP, and Tuason Racing.