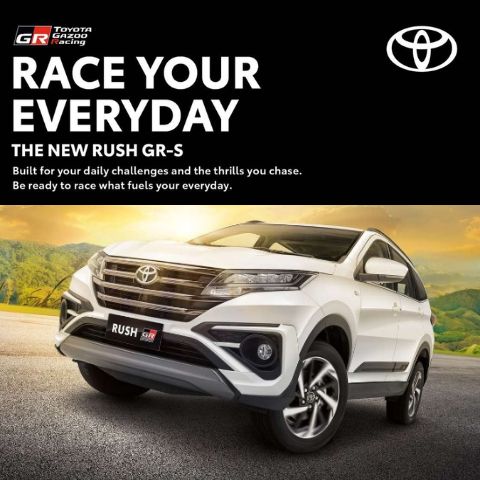 The New Toyota Rush GR-S now serves as the line’s top-grade vehicle. A favorite among customers who are intending to buy their first 7-seater SUV, the 2022 motorsports-inspired Rush is now styled with the official emblem and enhancements from the TOYOTA GAZOO Racing (TGR) line.

“The Toyota Rush has been a preferred SUV for young people seeking to fully live their active lifestyle with a car that can keep up with their desire to break away from the everyday,” said Sherwin Chualim, TMP’s First Vice President for Vehicle Sales Operations. “That is why it is very fitting that the Rush now comes with a GR-S variant that follows TGR’s philosophy of pushing the limits for better. For our customers, this means added thrill, excitement, and style in their everyday drives.”

It is powered by a gasoline engine with 4-speed automatic transmission. Its modern features include Smart Entry functionality and a 7-inch display a with Apple Carplay and Android Auto working with its 8-speaker audio system. It also comes with standard safety and security functions like Anti-Lock Brake System, Vehicle Stability Control, Hill-Start Assist Control, Toyota Vehicle Security System and more, plus other features like built in camera and back sonar.

The new Toyota Rush GR-S retails at Php 1,176,000 and is now available in Toyota’s 72 dealerships all over the country.