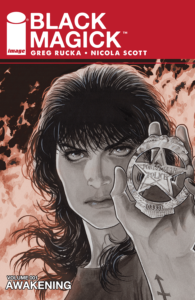 I am always a sucker for anything occult and dealing with Witchcraft, and to have that portrayed in a graphic novel is clearly a real treat for me.

Collecting the first 5 issues of the current run, the graphic novel introduces Rowan Black, a cop working in the city of Portsmouth, living the life of a dedicated protector of the law and a practicing Wiccan. It may not be the middle ages, but her character feels that she needs to still hide that part of herself from her colleagues but all is good until she is summoned to a hostage crisis with the man specifically asking for her before setting himself on fire by dropping his lighter on a pool of gas.

The next case finds Rowan investigating the death of a man drowned in the river named Bruce Dundridge, a convinced child killer and rapist. While on the surface, it felt like justice was indeed served. The manner of it being served baffled the Portsmouth police more as his left hand was cut off prompting Rowan to whisper, “A Murderer’s Hand”.

This new development and the revealed name of the first man as Rowan White, are just some of the variables that bring up a pattern to light and convince Rowan and her Coven leader, Alex, that she is being targeted and marked. 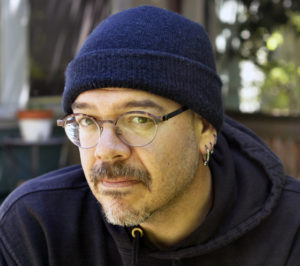 This new series, created and owned by Greg Rucka, known for his work predominantly in the DC pantheon with prominent character titles like, Wonder Woman, Superman and Batman and the popular countdown to the Infinite Crisis storyline, is one that is written with authenticity by incorporating the Wiccan lore and modern practice of Witchcraft.

And while the first issue ends with Alex in mortal danger and saved by Rowan herself, it confirms that the whole thing was orchestrated not by one, but by a legion of demons and magic users, a cabal, if you will, who deem that with all that has happened, or what they made happen, Rowan is ripe and ready and needs to be punished.

The graphic novel itself is brilliantly inked and drawn in black and white by Nicola Scott, except for the depictions of magick at work which were colored with hues of violent and blue. That totally did it for me.

This first volume is titled, Awakening. And whether it is read during the day, or preferably during the night, an awakening to a practice that has been around for generations may yet awaken a new one to the old. This first volume also reads like a television police procedural, so if for just that, the volume may yet attract readers who love shows like Law and Order, CSI and other shows that fall under the crime drama classification.

So be you a practicing Wiccan or someone who just loves the Occult and the Supernatural, Rowan Black is someone you would be rooting for and waiting in baited breath for her next set of adventures to come.