The CW Crossover of the Year! 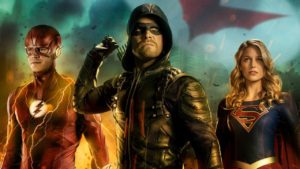 The Countdown to the CW Crossover of the Year has begun!

What began as a way to introduce the Flash back in 2013 during Arrow’s 3rd season, the crossover event that involves all of the superhero shows on the CW network has become an annual event. For those not following or knows a little of it, these shows would be Arrow, Flash, Supergirl and Legends of Tom0rrow.

The new event entitled Elseworlds is the 5th annual event that features all characters of the show appearing in each different episodes of the aforementioned shows. The only difference this year is that Legends of Tomorrow is not part of the crossover, as we gather that they have their own hands full with all the magical mayhem that involves the team who now is joined by the character, Constantine, perfectly portrayed by Matt Ryan. If you remember, the character himself had his own show on NBC, got cancelled and was a guest on Arrow in a previous season after fans clamored for his return. While we are all glad and happy that Constantine is back on TV, we feel that he does deserve his own show and like most, we are waiting in baited breath for the day that the CW officially takes him in for a series of his own adventures.

The Elseworlds event also serves as the introduction of a potential recurring character in the name of Batwoman, portrayed by Ruby Rose, who like the character she portrays is a lesbian in real life and is partnered with her fiancee, fashion designer, Phoebe Dahl. Along with Batwoman, iconic characters like the Monitor, Psych0 Pirate are also slated to make their tv debut.