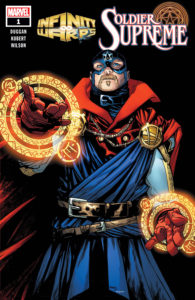 While the DC Universe has their hands full on their own respective crises like, Heroes in Crisis and the upcoming Drowned Earth, our heroes over at the Marvel Universe are equally dealing with something cosmic, large and reality bending by way of the Infinity Gems.

Yes, it’s another Marvel crisis involving those infernal gems, but to cut the matter short, the gems do not fall into the hands of Thanos but to everyone’s relief (or is it), it falls into Gamora’s hands. Knowing that she has to do better, she decides to do the unthinkable. That is, she folded the Universe in half!!!!

The result being new Heroes and new Villains were created with them not knowing that they are the result of a Universe unfolding unto itself.

Yes, its time for INFINITY WARPS!

I know the title does sound a little too comical (you think?) but all our Marvel heroes now have warped origins and identities and the comic that we’re featuring here is just one of them. May I present an amalgam of Doctor Strange and Captain America and he is called, Soldier Supreme!!! 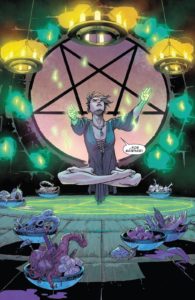 Like the original Captain, Stephen Rogers (see, told you) was caught in a war that neither side was winning at the time and so he volunteered to be a lab rat for a scientist who promised to make him “army material”. Unbeknownst to all, the good doctor has magically imbued the serum that she injects into Stephen. Soon, he physically transforms into a buffed and well-built soldier but not before prompting a Hitler supporter masquerading as an American MP officer to shoot him right on the spot. Instinctively he puts up this hands and a mystical shield in the shape and form of the orignal Captain America vibranium shield forms and saves him. But he is not quick enough to save Dr. Erskine as the Nazi spy shoots her instead. While tragically, the Erskine dies and is unable to replicate the success of the “experiment”, Stephen becomes the Hero that America needed and was quickly off to turn the tide of the war, along with his war buddies, Bucky Wong and Dum Dum Fury! (hold laughter or applause)

Winning one battle after another, he quickly becomes the beacon of hope that the troops needed to quickly repel any attack made by Der Fuhrer as they advance further into enemy territory. Their battles soon take them to the area of Ardennes, a region in the southeast part of Belgium, that stretches into Luxemborg, Germany and France. Here Bucky becomes a casualty of an attack but on the plus side, Stephen gets word that Hitler is dead. 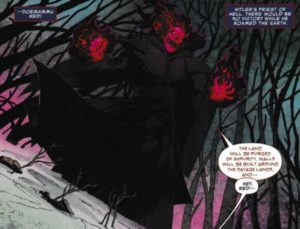 Realizing that the war may be over, he still needed to deal with Hitler’s High Priest, Dormammu Red! The battle is thus fought, long and hard with both mystical masters staving one attack after another, up until Dormammu got the upper hand and is about to finish Stephen off. He is startled, as so are we, when he is stabbed through the heart by no less than Bucky, the Winter Soldier, whose existence has now become an urban legend and is relegated to being a ghost. But villains will always have their last laugh, so to speak, in all things confrontational. Before he disappears, Dormammu banishes our “Captain” and Wong along with him into the Dark Dimension. 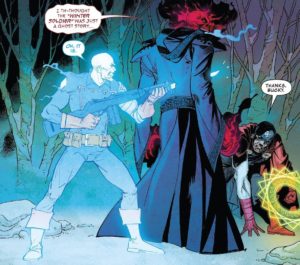 All in all the issue was a fast and fun read and if you are not a purist, you would actually welcome this new spin on the origin of these two merged Marvel characters. The art is beautifully drawn by Adam Kubert, the son of Joe Kubert, the Polish-American artist best known for his work on DC characters like Sgt. Rock and Hawkman. His father was also instrumental in the creation of the Joe Kubert School of Cartoon and Graphic Arts in Dover, New Jersey.

If you’re a big Doctor Strange or Captain American fan, this limited series is worth collecting in single issue form, as there are only 2 issues for this particular title. The arc for this “Warped” character is continued on in the latest issue of the Infinity Wars which is #5.