San Miguel Corporation (SMC), who financed and built the much-awaited Skyway 3 project, the county’s longest elevated expressway, is soft-opening this vital link between southern and northern Luzon today, December 29, and making it free to motorists for one month, according to its president and chief operating officer, Ramon S. Ang.
“We are glad to finally welcome motorists, even on a limited capacity, starting December 29. While this is only a partial opening, given the scale and importance of this project, this is a very significant development. We have the government of President Rodrigo Duterte to thank, for paving the way for the continuous construction of Skyway 3 over the past few years. We believe it will be key to our economic recovery after the pandemic,” Ang said.
Ang also credited Duterte’s entire economic team, led by Finance Secretary Carlos Dominguez III, Transportation Secretary Arthur Tugade and Public Works and Highways Secretary Mark Villar, for pursuing massive infrastructure development under its “Build Build Build” program, and helping accelerate the completion of Skyway 3.
In particular, Ang said it was under the Duterte administration when major right-of-way issues that hampered the project, were settled. It was also Sec. Villar that made it possible for the end point of Skyway 3 to be extended and connected directly to the North Luzon Expressway. 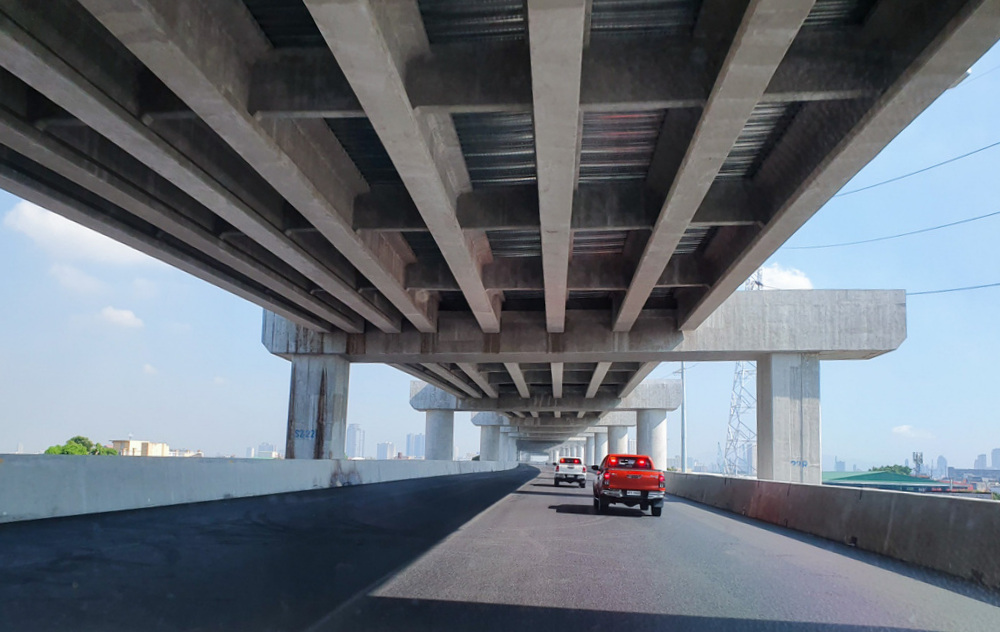 “This project is the result of the hard work and contributions of so many stakeholders, past and present. We especially thank President Rodrigo Duterte and his economic team, from DPWH Secretary Mark Villar,  DOTR Secretary Arthur Tugade to Finance Secretary Carlos Dominguez, for their continued push for infrastructure development to create growth and make life easier for more Filipinos,” he said.
For the partial opening, Ang said motorists will be able to use up to four lanes of Skyway 3. By January 14, he said SMC will formally open all seven lanes of the entire 18-kilometer stretch from Buendia, Makati to NLEX.
Ang said that the company would have soft opened the expressway sooner, but disruptions caused by recent typhoons meant more time needed to allow for the sufficient curing of concrete, and proper preparation for asphalting.
“We cannot rush the curing of concrete and preparation for asphalt, because these have to be given enough time and have to be done according to the highest specifications to ensure quality and safety,” he said.
Together with Skyway 1, 2, and Skyway extension which have a total of 20 kilometers, Skyway 3 extends the entire Skyway system to 38 kilometers. With the completion next year of the Skyway Extension project at the southern end–from Susanna Heights to Alabang–the entire Skyway will have 36 access points on both sides, from end-to-end.

It is seen to dramatically reduce travel time between Makati to NLEX to only 20 minutes, and Alabang and NLEX to only 30 minutes. It will also serve as an alternative to Edsa for those traveling between Metro Manila cities, reducing traffic on the country’s busiest thoroughfare.