Now, who is this character?

Well, kids from the 90s will remember this film that opened and starred Liam Neeson, who plays a surgeon that develops a synthetic skin that he uses to his advantage to perpetuate a new identity known as “Darkman” after being horribly disfigured by the mob.

The movie opened on August 4, 1990 and was directed by Sam Raimi. Raimi initially wanted to direct a movie version of The Shadow, another dark character that had its beginnings on radio as a drama series and was voiced by Orson Welles. But when he failed to secure the rights to it, he wrote Darkman and incorporated elements of The Phantom of the Opera, The Elephant Man, and of course, The Shadow.

Given his recent success with Doctor Strange and the Multiverse of Madness and his past films like the original Evil Dead series and the first Spider-Man movie trilogy with Tobey Maguire, Raimi has decided that developing a legacy sequel would be a good time.

While the movie itself has spawned 2 sequels, Darkman 2: The Return of Durant and Darkman 3: Die Darkman Die, those two subsequent films were direct to video releases and had Neeson replaced with Arnold Voslo whom moviegoers and fans popularly know as Imhotep in the Mummy movies that starred Brendan Fraser.

“Yes. Universal Studios is talking about a Darkman sequel,” Raimi said recently.  “There’s a producer attached, I haven’t heard the story yet or gone into it, I’ve been so busy with this movie (Doctor Strange and the Multiverse of Madness). But I think it’s cool.” He added that he doesn’t know if Liam Neeson is up to reprise his role again. 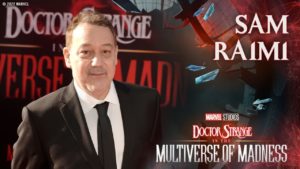 Incidentally, Neeson at one time did disclose that if the opportunity for him to portray Darkman again, he would welcome the chance.

The film itself was produced on a $14 million budget and would gross just over $48 million at the global box office. Although there were Comics, novels, action figures, and even a video game was created to tie into the film, the only sequels made were the two direct-to-home video movies that followed.