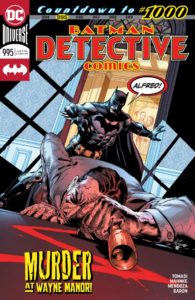 Having established in the previous issue that someone is specifically targeting Bruce Wayne whom we all know is Batman, the next issue of Detective Comics, #995, while making its way to the much awaited Issue #1000, quickly picks up where the Issue 994 left of, with Bruce taking Leslie Tompkins to the Bat cave after being exposed to Joker’s Laughing Gas!

We also know that anyone exposed to the Joker Gas instantaneously feels its ghastly effect. The end result? You become like the Joker, another hysterical laughing citizen of Gotham. And sadly this issue starts of on a sad note with Leslie succumbing to the ill effects of the gas and dying, with the ready made antidote proving ineffective. I love the montage that the issue gave while Bruce and Alfred were administering the antidote, with flashes of Bruce and Leslie interacting with one another while he was growing up. These panels were interspersed with the running panel of Bruce reviving Leslie with a defibrillator. Presenting it in this way, it makes the moment more tragic and heartfelt that it moved Alfred to tears when he was alone in the kitchen, after Bruce wanted some time alone.

But as fate would have it, the people living in Wayne Manor won’t be getting any alone time as the doorbell ringing meant that there was a visitor. Who could it be at this time? Well, Alfred answered the door, after voice verifying it to be Commissioner Gordon, only to get the pointy end of a stick. In this case, the end of a rapier puncturing his left lung. 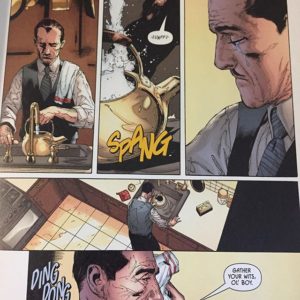 Another clear evidence that whoever is behind these Bruce-Wayne centric crimes knows that Batman is Bruce Wayne and will do almost anything to get his attention. But is his attention all that this felon needs or is there more to the motive behind all this personal intrusion? To get to the bottom of things, Batman decides to visit his favorite inmates at Arkham Asylum.

These would be the criminals that he has personally put behind bars. Some of them may or may not know Batman as closely as Hugo Strange (my favorite Batman villain) but these are his only leads to figure out who is targeting him and why. The long is long. His patience wearing thin. And there many inmates to interrogate.

This is the kind of mystery that Green Lantern veteran writer, Peter Tomasi, is comfortable with. Laying pieces of a bigger puzzle for readers to speculate and form theories around the association of the different set pieces, in the hopes that they can unravel the mystery themselves. 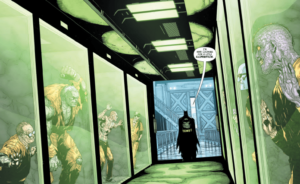 But as this is only the second issue in this new arc, we are for sure guaranteed to have more mysteries deepening and branching off to new possibilities and perhaps new leads as the next issue comes in.
Yes, I am hooked. Line and sinker.
Give me the next one. 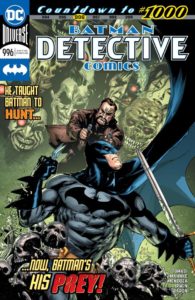