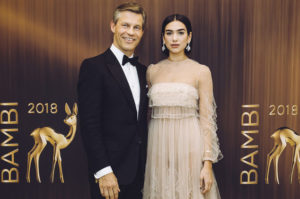 Dua Lipa was a big winner at Germany’s Bambi Media Awards held recently at  the Berliner Theater, where she bagged the global music category.

The German DJ, Felix Jaehn, presented the award to the British artist, who performed some of her hits like, “Be The One”, “New Rules” and “IDGAF”.

Other winners that night, were Mark Forster, who got the award in the category for national music and performer Michael Schulte was lavishly honored  in the public vote category. Veteran British boy band, Take That opened the show with with their 2008 hit “Greatest Day,” while German/Spanish vocalist and musician Nico Santos delivered an excerpt of his single “Rooftop”.

Frank Briegmann, president and CEO of Central Europe Universal Music and Deutsche Grammophon, paid tribute to Lipa. He said Dua has proven that her music can move and enthrall individuals. He added that having an award like the Bambi in the entertainment category is one of the best compliments any artist can get in Germany.

Bambi’s are granted by journalists to “recognize individuals who inspire audiences.”