A sad day for Arrow fans… 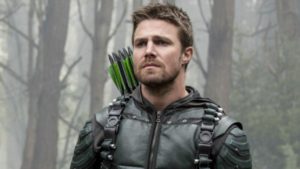 That is unless you are the show called Supernatural, which is currently on its 14 season and recently renewed for Season 15. But while that show does share the same affiliation of being in the CW, the people in Starling City seems to have reached the end of their rope, in this case the end of the series. Stephen Amell who plays the lead character of Green Arrow in Arrow, has recently announced that he is stepping down from the title role as the series itself will cap their 8 year long run. The show which birthed the creation of sister shows namely Flash, Supergirl and Legends of Tomorrow and now Batwoman, has collectively been called The Arrowverse. 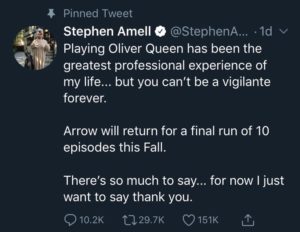 During one of his broadcasts on Facebook Live, Amell added, “Something tells me even when I’m done, I won’t be gone. If you watch the Arrowverse, you should understand that… I think it’s been a good run. It’s no Supernatural, but it’s been a good run.” The final season’s 10 episode run means Arrow will wrap up shortly after this fall’s “Crisis on Infinite Earths” crossover with The Flash and Supergirl, and possibly Legends of Tomorrow.

Naturally his tearful goodbye prompted a number of people to react to the news, including fellow cast members Colton Haynes, David Ramsey, Madison McLaughlin, and Rick Gonzalez, among others.

The 8th and final season of arrow debuts in the Fall of 2019.