A new member joining Guardians of the Galaxy?

Break out the champagne and start playing Vanessa Carlton because actor, and comedian  Terry Crews is joining the MCU!

Well, that’s what we thought at first.

But to be more specific, he is joining the MCU not to star in a feature film but will be appearing instead in the Guardians of the Galaxy: Cosmic Rewind ride, which opens next month at the EPCOT Center located at the Walt Disney World resort.

Crews will be playing Centurion Tal Marik, a close advisor to Nova Prime, a role played by Glenn Close in the movie and who will be reprising her role. Just to be clear, Marik is a character unique to the Marvel Cinematic Universe and is not an established Marvel character.

FIRST LOOK: @TerryCrews gearing up for his new role as Centurion Tal Marik, Commander of the Starcharter and close advisor to Nova Prime. Marik must call on the Guardians because it's "SAVE THE GALAXY TIME…again!" #CosmicRewind pic.twitter.com/P910ygZKsW

Apparently, Crews was recruited by Director James Gunn after saying that he loves Rom: The Spaceknight, a character who appeared in a series of Marvel comics in the 1980s but is not actually owned by Marvel. 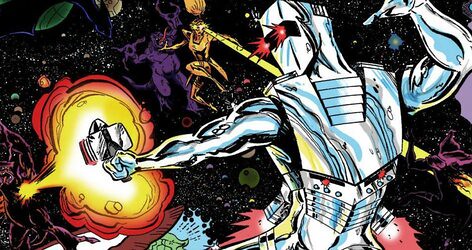 Gunn himself replied to a fan’s request to add Rom to the Guardians of the Galaxy movie franchise and said that he is unable to because of a rights issue and that Rom is not owned by Marvel.

Guardians of the Galaxy: Cosmic Rewind will be Disney World’s first Marvel-themed ride.  But because due to a licensing agreement with Universal Studios, Disney cannot use most Marvel characters at US parks east of the Mississippi River, however, that agreement does not seem to apply to the Guardians of the Galaxy. Other Disney parks (including Disneyland and Disneyland Paris) have an Avengers Campus featuring multiple Marvel attractions.

The new ride is a unique ride that will tell a story involving the Guardians, the Celestial Eson, and the Nova Corps. Now, not only will the roller coaster’s cars rotate in 360 degrees so that riders can see the full story play out, but they will also get to see Disney World’s first-ever “reverse launch” coaster.

Guardians of the Galaxy: Cosmic Rewind will also be one of the longest enclosed coasters in existence.