Equipped with a new 2.0-liter Bi-Turbo diesel engine that puts out 213Ps maximum power with 500Nm of torque. The Bi-Turbo has the advantage of sequential turbocharging to deliver better response, drivability and maximum efficiency. With two turbo chargers, the first is a variable geometry turbocharger used to deliver quicker throttle response and eliminate lag by spooling up at lower engine rpms. The second turbocharger is a fixed geometry unit with a high flow capacity to deliver maximum power and performance at higher rpms.

The Ranger Raptor’s 10-speed automatic transmission is Ford-designed and built, and is shared with the larger F-150 Raptor. It’s manufactured using high-strength steel, aluminum alloys and composites to optimize durability and weight. Having 10 gears results in better acceleration and responsiveness due to a wider gear-ratio.

The Ranger Raptor is distinctive in it’s design cues in and out. Out front, a new grille takes is similar to the one on the F-150 Raptor with FORD emblazoned front and center. The front bumper features new LED fog lamps with air-curtain ducts. The front fenders made from composite materials not only look tough, but resist dents you get when you go off-road. Ground clearance is now 283mm.

The Raptor’s frame consists a mix of various grades of high-strength low-alloy (HSLA) steel, the stiffened side-rails are made from increased HSLA grade steel to absorb off-road high speed impacts. It rolls on All-terrain BF Goodrich 285/70 17-inch tires which were specially developed to ensure its stability on and off-road. 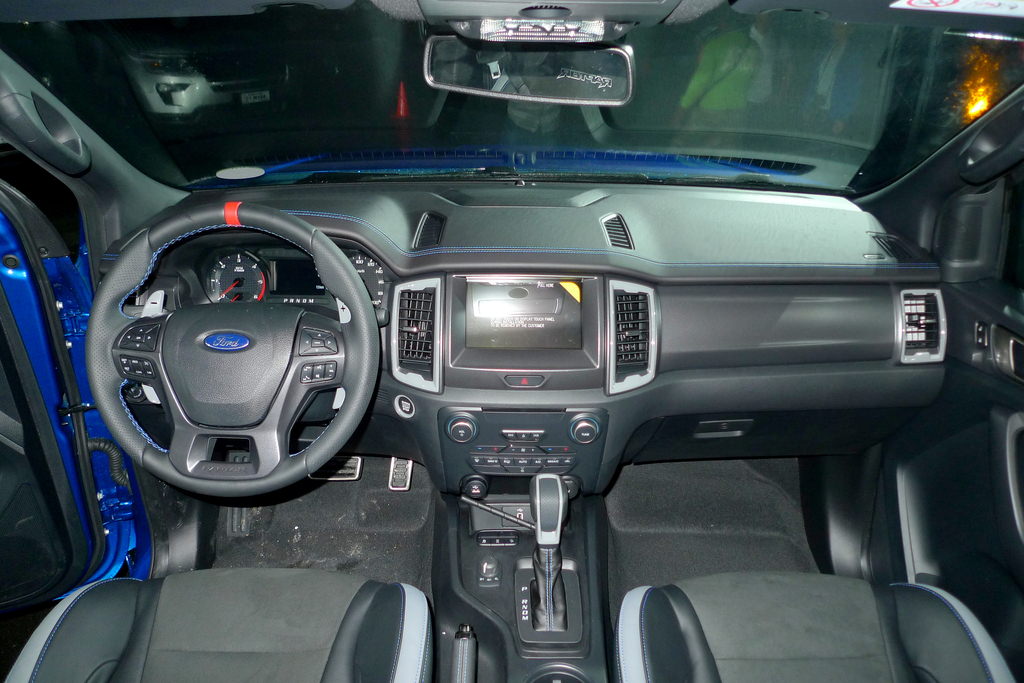 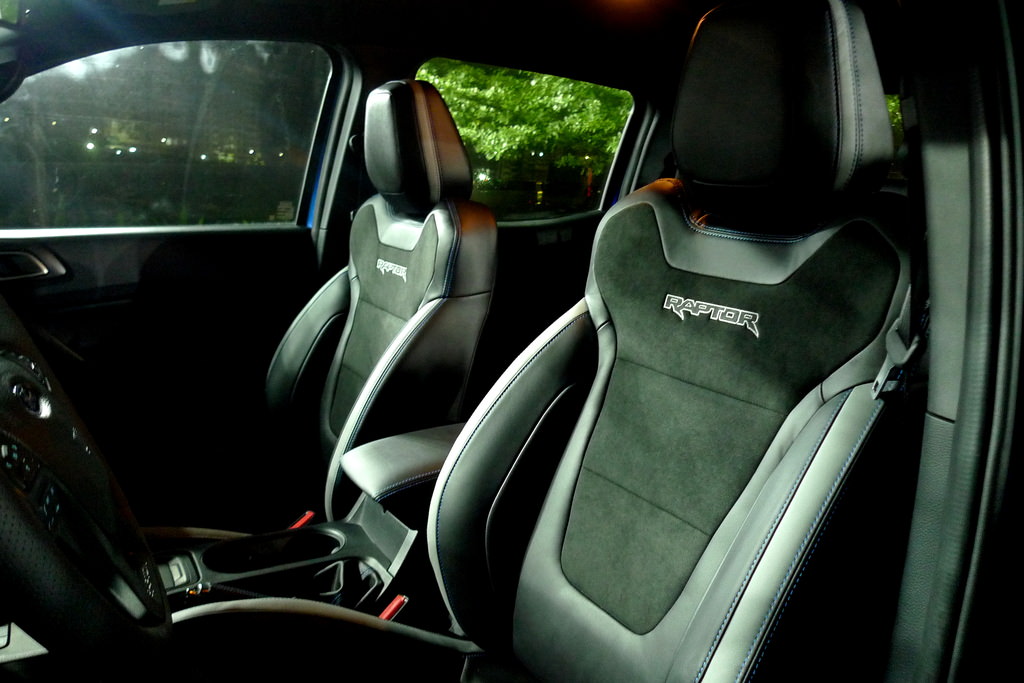 Inside, the Ranger Raptor, Ford Performance DNA is evident in the interior design, The seats are designed for high speed off-road performance support, while providing superior on-road comfort.

There are a host of advanced Driver Assist Technologies (DATs) available at the push of a button which includes SYNC3 – a fully integrated, voice activated system that lets the driver use their personal devices while their hands stay on the wheel and eyes on the road. It’s Navigation system comes works even when off-roading in remote unmapped areas, even offering a ‘breadcrumb’ feature to leave a trail – perfect for the serious off-roader. Ford’s Electronic Stability Control (ESC) system is present to assist in difficult cornering and braking situations. The technology suite also includes Trailer Sway Control (TSC), Hill Start Assist (HSA), Hill Descent Control (HDC) and Load Adaptive Control (LAC).

“The Ranger Raptor is truly the ultimate Ranger. With its bold appearance and extreme, off-road performance features, the Ranger Raptor represents a unique offering that we know Filipinos are really going to get excited about,” said Rodel Gallega, vice president, Marketing and Sales, Ford Philippines.

“We are excited to welcome the highly-anticipated Ranger Raptor to the Philippines. The Ranger Raptor showcases the best of Ford Performance’s expertise in vehicle design and engineering, and we know our customers are really looking forward to enjoying its immense off-road capabilities,” said Bertrand Lessard, Managing Director, Ford Philippines.

Better performance with new powertrain
The new Ranger offers a choice of three diesel powertrains, these include the new generation 2.0L Bi-Turbo and 2.0L Turbo engines, and the Ranger’s proven 2.2L TDCi.

Available exclusively on the Wildtrak 4×4 variant is the new-generation 2.0L Bi-Turbo diesel is paired with an advanced 10-speed automatic transmission. With 500Nm from a low 1750rpm, the Bi-Turbo delivers a greater torque spread, with the 10-speed’s close ratios reducing gaps in power and acceleration to make steep, slippery hill-climbs, much easier. The Wildtrak variant optioned with the new engine maintain Ranger’s equal class-leading payload and 3500kg towing capability.

The 2.0L Turbo diesel engine, available on the Wildtrak 4×2, is also paired with Ford’s advanced 10-speed automatic transmission to deliver 180PS and an impressive 420Nm of torque.

The XLT and XLS variants, which also includes the Ranger 2.2L XLS 4×2 AT variant in the portfolio, are now equipped with Ranger’s proven 2.2L TDCi engine, which puts out 160PS/385Nm and comes with a six-speed automatic or manual transmission.

The new Ranger boasts of advanced smart and safe features for a more comfortable and convenient drive. The Autonomous Emergency Braking (AEB) feature helps mitigate risks by detecting pedestrians and vehicles, alerting drivers with an audible and visual warning. With the AEB, the new Ranger pre-charges brakes to increase brake-assist sensitivity providing full responsiveness when the driver brakes.

The new Ranger’s features include Active Park Assist (APA), which helps the driver find parallel parking spaces and steers itself to a parking spot. All the driver needs to do is control the throttle and brake. Also available is the Adaptive Cruise Control feature, which senses traffic and adjusts speed automatically. When traffic slows down, the new Ranger slows down too. As soon as traffic clears, the new Ranger returns to its pre-set speed. Meanwhile, the Lane Departure Warning feature vibrates the steering wheel if the driver unintentionally moves out of his/her lane at certain speed.

Loading is easier than ever on the XLT and Wildtrak variants with the introduction of a first-in-segment, Tailgate Lift Assist. With a new internal mechanism, the Ranger’s tailgate is now lighter to lift, with a 70 percent reduction in initial force required to raise it for closing. Not only does this system require less effort to lift, it also means that it’s easier to lower.

The Wildtrak variants offer the Smart Keyless Entry and push-button start, as well as up to six airbags ensuring maximum convenience and safety. The new Ranger also offers the SYNC3 feature compatible with Apple CarPlay and Android Auto, allowing drivers to make calls, select music, and use apps with eyes on the road and hands on the wheel.

Bolder look, inside out

The new Ranger’s striking exterior sees styling updates that carry on the off-road stance and visual appeal of its predecessor. With a bold new grille, a more distinctively-chiseled lower bumper now offers a broader intake for a more balanced look. Ranger Wildtrak variants are equipped with LED daytime running lights and HID headlights for optimal visibility and vision, as well as hoop sports bar, roof rails and bed rails.

The new Ranger’s interior is also home to an array of upgrades. With durable and tactile surface finishes ensuring a long lifespan with a premium touch and feel, the spacious Ranger interior now sports a black theme. Contrasting detailing such as shadow chrome and silver accent stitching help give Ranger’s interior a more luxurious feel.

The new Ranger’s suspension had been upgraded across the range to reduce and better control roll, with an emphasis on improving the driving experience when fully-laden and towing.

New packaging also enables geometry changes that bring improved ride, a reduction in body roll as well as improved steering precision, while improving the drive and refinement. The suspension changes do not impact on Ranger’s towing and payload capabilities.

The 8 variants of the new Ranger are available at the following price points:

The new Ranger is now available in all Ford dealerships nationwide.